I had left the Sequoyah National Wildlife Refuge in Oklahoma when I saw this Red-tailed Hawk Standing In Grass. It was busy feeding on something and was ignoring the vehicles going by. I stopped in the road and began photographing this Hawk. A short time later a loud car came by and scared this Red-tailed Hawk off. 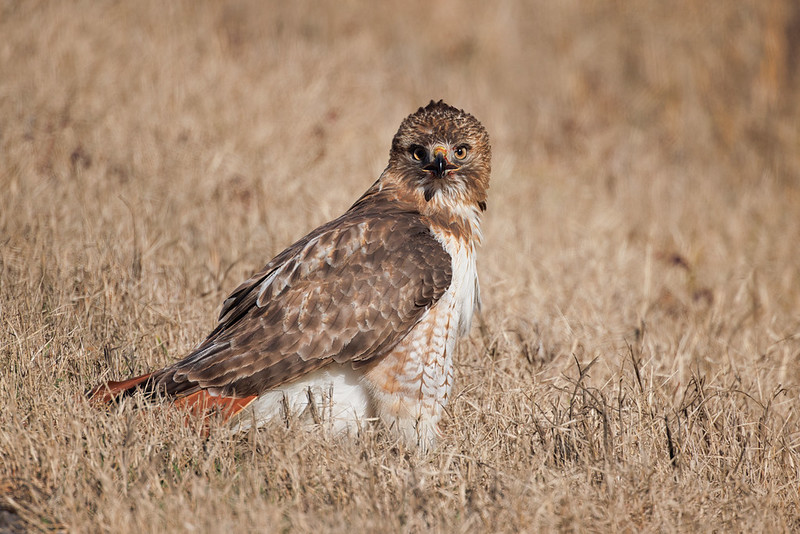 I’m not good at identifying the different types of Hawks we have in this area, so I checked with a birder friend. I was informed that this is a young Red-tailed Hawk.

This is what I was told and also what I read about young Red-tailed Hawks.

They generally have a slightly paler head and a darker back than their parents. They also have a pale wing-feathered edge above their bodies.

In young red-tailed hawks, the tail is a light brownish above with several dark brown bars, but these may vary in width. The bill is generally short and dark, and the head is slightly smaller than its body frame.

As the bird gets older, its iris gradually turns brown, which is the adult eye color in all races. This change occurs over the course of four years. Adult birds usually have dark brown under the wings and a mostly pale wing.

How I Got The Photo: Young Red-tailed Hawk Stretching Wings

This Hawk was in a dead tree that had fallen in a field near the auto tour road (Sequoyah National Wildlife Refuge).